I wish to drive


In Bugatti Veyron with entourage


As I sip Dalmore selene


I wish to sit


In the luxury of my house


With servants at the snap of my fingers


My boys do all the work


I wish to become


A better man for my woman


Serve her breakfast in bed every morning


Gift of roses every Wednesday


And romantic dinners every Saturday


I wish to be a famous poet


To Los Angeles to Mumbai


With my name falls seven


On every ten lips


I wish my wishes


And my dreams become reality


That I shall never see death. 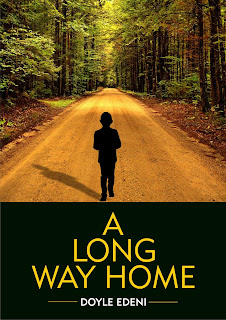 Everyone, no matter the race, gender or status is going through a journey in this life. A Long Way Home is six part anthology of seventy-five free verse poetry with tales of the mountains and valleys in the author’s journey throw life. The rhythmical arrangement in the poems collection brings poetry into  its array. A Long Way Home is an easy read, as anyone could easily find his or her place through the journey of life in this book. This book is a must read for anyone who understands that life is a journey.
Posted by I.J. Kalia at 07:42 No comments:


Marriage in Nigeria is now a big franchise, it’s more likely to a building project. Young men are afraid to get married all because of the inane cost. Now, marriage is in steps, just like a building project.  First, you’ll dig the foundation, you’ll rest; after another six months you’ll come back and lay the blocks, then rest again, come back for the lintel , roofing and then do the finishes.

I doubt if there is ever a ‘finishing’ in Nigerian marriage. Other developed countries work fine with either the court wedding, or the church. Back in the days of my elementary school, I was taught kinds of marriage in social studies. If I could recall, I know we have court, church and traditional marriage. But I think the social studies text book should be reviewed, because nowadays, we do all, plus extra...all in one.
I got to learn about the extra when I began my own marriage plans. Title of events were just coming up anyhow. I heard one called ‘knocking-at-the-door’ (and this is money leaving your pocket), then you’ll do the proper introduction when you would be given the list (another mega expenses), then it progresses to traditional marriage where you present the items on the list and payment of dowry, then god save you she’s not Yoruba, you’d do engagement party then sent-forth for the northern girls, and then you would head to court, and finally the church.
As if these layers of struggles aren’t enough, annoying in-laws would come with their own notion and troubles. At a point one would start looking at his wife as a merchandise that he bought with his money. I wonder what you’ll call Nigerian wedding system, where you have to mix court, traditional and church wedding? ‘Courtrachurch’ marriage, I guess. Funny nation, funny people.
I.J. Kalia
Posted by I.J. Kalia at 04:41 No comments:

A lot of men today, walk about like a ticking time bomb waiting to explode at the slightest provocation. This instills violence in their nature as they walk about with a heart heavy as a crane with no one to share the burden with. A lady might be going through a crisis and she will cry out; asked her why she's crying with a little perseverance and she'll tell you and that is it. Men on the other hand, live in perpetual denial. Even when you catch a man crying, he'd look you in the eyes and tell you he's not crying.
A week ago, I wanted to get something at Wuse market, I saw a Taxi man with his head on his steering wheel and I thought maybe he was resting or sleeping. I knocked at the window, he raised his face and I saw his eyes. He was actually crying.  "Wuse market,” I was barely audible.
“250,” he replied without looking at me. He was struggling to clean his tears. I wanted to ask why he was crying but didn't know how to begin. He noticed by the way I was looking at him and he said, "Some tin just enta ma eyes." Gosh! You need to hear his voice; you won’t need a prophet to tell you he's a pathetic liar. I doubt if he believed his lie.
"Really? The both eyes?" I asked and he shook his head while the tears kept pouring profusely.
I didn't know what to say to him. And by the look of things, he was not even ready to share. Who knows what was eating him up to have pulled over by the street to cry? I know I might do little or nothing at all about the problem but there is some sort of healing in speaking up, you never can tell who's listen...help can only find you when you speak up!
I.J. Kalia
Posted by I.J. Kalia at 08:51 No comments:

These girls will not kill me. They annoy me to the soul. Most times, I wonder what happened to our mothers-kind-of girls. Virtually all the girls I see now come with a label; ‘FEMINIST’. I tried to be as liberal as I can possibly be to see reasons with them but only to get confused the more.
The other day, a lady walked out on me on a date night just because I asked her view on feminism. I allowed her explain in peace o; but when I said my view on feminism, it became a problem. In fact judging by the looks I saw in her eyes plus the bottle of coca cola sitting before her, I was lucky to have left the lounge with my head bandage free. There is no name she didn’t call me that very night. Of all the avalanche of the names she called me that night, ‘Antifeminist’ and ‘typical African man’ stuck on my mind. But for peace to reign I humbled myself and composed a two page SMS I had to surf online for clues, bought flowers, packed my ego and begged.  If begging were to be a game in the Olympics, I’m sure I’d go home with a gold medal.
Finally, after making a fool of myself for two months, she forgave me and we continued from where we stopped.  For few weeks I tried my best to avoid mentioning ‘man’ or ‘woman’ in our conversations until last weekend at her place, she ordered a pizza and when the delivery guy came, she asked me to pay; but since I didn’t have much cash on me I suggested we split the bill, hoping she of all people would understand since she’s a feminist. But to my optimum surprise, she rebranded the label and called it gender roles. She said I should pay that I am the guy. Which one is gender role again?
Last come to last, this confused lady walked me out of her flat. I tell you, if she see my legs on her threshold again make she cut am. I’ve had enough. Mek I catch mysef go buy eni yeye flower.  Nonsense!
I.J. Kalia
Posted by I.J. Kalia at 01:37 No comments:


An invisible balance sheet has been passed down to us from generations to generations on how we ought to live and measure standard of success as a man. A lot is going on in the minds of this fraction of human race that meets the eye. Being a man is not easy in this age. I tell you, it's quite easier to be a man few generations ago. Then a man is expected to provide a home, acquire a farmland and marry as many wives as he can. These wives in turns helps cultivate his farmlands, raise his children, and a bowl of meal is expected to be ready for him when he comes home.
The men of olds live like lions in a pride. Their function is to defend the domain, have little or nothing to do with raising kids and kitchen. You’ll agree with me that, in today's world, the more wives a man takes, the nearer he gets to the grave. In most families today, women earns better than men. As a man, you literally, have nothing to show to a woman; talk about cars, money, house, education etc. most women have better.
Sadly, our fathers don't make easy it on our young men. We’re groomed with that same mindset that was passed to them by their fathers also.  And that is the problem. This pattern that worked for men in that era is no longer relevant. It’s totally obsolete in this era. I bet you, men of those days can't survive women of today.  Now men, gets involved in children, chores, and some decisions are even taken at home without his consent.
There is nothing wrong with men helping at home, but everything is wrong with the obsolete mindset instilled into the minds of our young men. This outdated method of training has led men into depression and the feel of emasculation. A typical African man would help at home with the chore and the kids without having to understand why he should do those and it tells on his ego
the solution to this problem is to understand the era we're in. A lot have changed and it's no longer just 'the men's world', it’s ‘the revolution world'. Our parent should take it upon themselves to instill the proper and functional mindset in our male children.
I.J. Kalia

It’s no longer a strange news that men lead more violative than women; both as the perpetrators and victims, men are more likely to be murdered and most likely the perpetrators of violent crimes. In fact, the common areas where women are victims of violence more than men are in the area domestic abuse and sexual assault. The world is evolving so fast and society in general is becoming more unfavorable to the men that most men question their masculinity and think the best and only medium to prove your masculinity is to resolve to violence. And this idea has driven most into joining gangs and into all sorts of violent acts. Some see women (their spouse) as the cause of the problem and pounces on them at the slightest opportunity with the feeble conception to show her who the man truly is. This notion is entirely wrong, violence is never the answer.
I think the society and the world at large is not be directly blamed for the ceaseless violence befalling and residing among the male folks, I strongly believe that change is constant and as along as the universe is concern, change is inevitable, so the main invisible cause of the violence is the inability to evolve with the world. You could heap blames on the society and economy, but you’d only be sounding like broken record.
In the other hand, men are not to be blamed for this too, this violent conception has its root from childhood, boys are more likely to be beaten at school than the girls and the parents also encourage fights between boys. imagine when as a child you’re taught by someone you look up to punch that kid who insulted you. It would be a great surprise to imagine you’d reach adulthood believing violence to be the right response to every aggravating circumstance.  with this, you see why unlearning that lesson would be next to impossible.
I.J. Kalia
Posted by I.J. Kalia at 04:16 No comments: